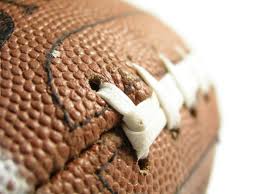 That word that stirs up all sorts of images of overpaid, hot-headed athletes, scantily dressed women on the sidelines and balding men donned in incredibly expensive suits accented with obnoxious ties who talk about the details of the sport with a seriousness that could accompany diplomatic international policy. Oh, and those poorly written beer commercials that are supposed to connect with....well, I'm not sure...still trying to figure that one out.

I do actually know a lot of perfectly normal, well rounded individuals who love football...my husband, mother-in-law and our pastor included.  I don't actually mind watching a few rounds, or innings, or...uh...downs...myself,  especially if someone has offered a dip that contains cheese and salty chips!

All joking aside, I have one quick short story about football from this season: a sweet story about a daughter, her father, and football.

Scott has reignited his love for the sport this year thanks mostly to his sister's husband Dave who encouraged him to join their fantasy football league.  He has been watching the games with a newfound zest that has been been on hiatus since his own days of playing high school football and Sundays in the dorms with pizza in college.

The poor guy meets me and gets married and his football watching somehow goes down the tubes. Despite the fact that his buddies would probably like to blame that on me, I SWEAR I had nothing to do with it! I swear!

They always look at me, partly out of curiosity and partly to check in...I smile and nod as if to say, "Yes girls. It's o.k. This is normal guy stuff!"

(And then there are the times when they take advantage of Dad sitting on the couch and jump off the edge and onto his lap and he declares that "the next one BETTER be a boy!" Although, sorry babe, not sure a 3 year old boy is going to behave any differently when he could be using you as an indoor jungle gym!).

But the cutest darned thing happened several Tuesdays ago--Ava's library day. She always leaves with her two books from the previous week in her backpack in the morning, and her mom, the book lover, waits with eager anticipation to see what she will bring home in the afternoon.

(I must admit the Taylor Swift book last week left me raising my eyebrows...Where is the poetry? Or the good literature sweet girl?! Taylor Swift? I didn't even know you knew who she was?! )

So several weeks ago, when I picked her up, she was so excited to share her library news with me.

"Mom, I got one book for me and one for Daddy! I got a football book for Dad because he likes football"....pause..."I like football too!"

What?! I gave birth to a long legged, blue eyed, blonde haired daughter who likes....football?! Haha, there is great humor in heaven! If you know me, the petite, brunette who would rather read a book than watch sports, you'd see the humor in this.

During our drive home from lunch this past Sunday Ava also declared that she wanted to watch football with Dad, again! (For the record, the "watching" only lasts 15-20 minutes...it is the gesture that counts, right?!)

It's quite cute actually. Who knew you could learn so much from your child by observing their kindergarten library book selections?!  Last week (before the football bit) I discovered she liked Taylor Swift because the 3rd grader who lives two doors down from us has a Taylor Swift poster hanging in her room. This week it is football because her Dad likes it.

I will admit...I like the football affection and admiration better than the pop star affinities.

At the end of the day all this football and library book stuff got me thinking... that besides finding this all cute and amusing, there were some big things...soul things...character building things...that are unraveling here:

1) Kids are SO maleable at this age and that it is INCREDIBLY important that we pour as many positive influences into their lives as possible.  We, as parents, must be careful not to undermine their youth and dismiss them by saying, "they're only in kindergarten or first grade or third grade." They are young and not naive, but formable and impressionable. THESE are life forming years and should be treated with great care!

I'm asking myself the question, more and more, How can I proactively be filling Ava's heart and life with good? With positive moral values? With tools to treat others well and to be a light in an often murky world?

2) Secondly, I'm realizing in concrete terms that Mom and Dad are still a big deal in her life! And I suppose that while we always will be I would be naive to think that there will not come a time when, if strong relationship foundations are not laid now, that friends and other influences will have much more sway.  Now is the time for us to embrace that role and be stronger influences than all the other competing voices likely to come her way!

I don't have the answers, only the commitment that we're striving diligently to do the best job we can.

So, as we navigate the funny, full of new experiences, year of kindergarten, I continue to both enjoy the stories she comes home with and also look for as many teaching opportunities as possible...

We are embracing and taking note of the ways that she reaches out to connect with us and how she shows us she loves us. We are taking notes of her "love languages" and interests so that we can use those to love her right back. Whether those ways include sweetly drawn pictures and notes or library books that include unexpected topics like....Football...we are counting them all as important blessings and are grateful for the connecting moments.
Posted by Lisa at 12:00 PM