I feel like it's my due diligence to post a little something about Ava starting preschool. I mean, what kind of mommy blogger would I be if I left it out?! 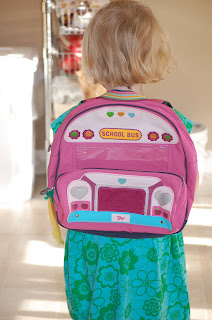 She was thrilled to go, but I knew she'd get a little homesick later in the morning (the class is from 9-12), which is exactly what happened. She was smiling when I dropped her off and crying when I picked her up...poor kiddo. In her defense, apparently the kids were all pushing in their chairs to get ready to leave and her finger got pinched between a chair and the table...I think it was like when you're having an emotional day and just ONE thing could put you over the edge and then that one thing happens!

I was prepared. I had stopped at Target while she was in school and attempted to purchase some yummy little snack that she hadn't had before that I knew would bring a smile to her face no matter what her morning had been like.

So how did the first day go?

For her: She said she loved it. They painted, they played, they ate cheesy crackers. Sounds like fun, huh?! She's not totally convinced she wants to go back next week, but she had fun nonetheless.

For me: Hmmmm. I still have mixed emotions about this whole thing (Shhh...don't tell Ava that!). There is part of me that thinks this is great for her-- the social interaction with children her age, the guided learning, the ability for her to do crafts and make a mess of their tables and not mine (!), the learning how to work with other kids and listen to a teacher...I think it will all add some much needed structured learning into her life.

Also, because it is a Christian pre-school, I feel blessed to have such wonderful and loving people influencing her life and teaching her about the God who created our world and the Christ who loved us enough to enter into it.

All that said, there is this lingering feeling that it is all too early...that she is only 3 and that we, as a society, might just be pushing our kids to grow up a bit to early. That she doesn't need to learn where and when to push a chair in quite yet, or how to stand in a line of children. That she already knows her ABC's and that I am teaching her plenty at home.

Perhaps it's because I grew up in a very traditional home without a huge pressure towards academics, especially not at such an early age. This was the conversation I had with my mom the other day...

"Ava, is starting preschool this week!"
"Wow. Great!"
"I know, it's kind of crazy. A lot of my friends signed their children up and it seemed like the right thing to do."
"I know. It's almost like you feel like you have to these days. Like your child will be behind if you don't. Geez, the kids used to just learn all of those things is kindergarten. Preschool is the new kindergarten."
"Yeah, I guess it seems that way..."

That about sums it up.

So...I don't have a conclusion...just an ongoing inner conversation. I suppose that is how much of parenting works though. There are some things we enter into with our children in which we have full confidence and other things that seem to be accompanied by a certain degree of skepticism. We walk though holding onto that skepticism until we either change our mind and our decisions or eventually reach a certain peace.