It's been a big couple of weeks around these parts-- Ava's preschool graduation and then her birthday...her 5th birthday as a matter of fact!!

Mommy has been busy trying to keep up with the festivities. And manage the aftermath of such festivities.

This is about where you can find me at 8:30 at night the last couple of weeks... 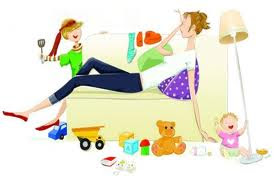 On Sunday we had a "family" party, which, as those of you with a lot of family around know, can be quite an event. I think I counted 15 adults and 5 children. Our house is a decent size, but the kitchen is on the small side, we have no dining room (it was taken over and has been occupied by a large gathering of toys and is formally known around these parts as the "playroom") and while June is usually a great time for outdoor events, which is what we had planned, we had monsoon rains on Sunday.

Yup, that meant all 20 of us got to cuddle closely inside.

My parents ate their dinner on the floor in the dining...ahem...playroom....with Ava's two cousins and my sister who sat at this luxurious table...Yes, the one in the corner with the pink, blue and green chairs.


Most of the rest of the group squeezed around our kitchen table with the six kitchen chairs added to a fine collection of ratty bar stools and cheap wooden folding chairs.

Super classy. You can see how we roll here.

Want to know the best part...I FINALLY convinced Scott that we were not totally unclassy, trashy folk if we set up a table in the garage, given the weather and all. You see, a lot of people in our town and several towns around like to hang out in their garages all summer...watch t.v., play cards, etc. etc. They set up couches and tables and all sorts of amenities.  I see NOTHING wrong with it...Hey, use the space you have, right?!

Scott grew up in a town where that was a big no, no. You did not, under any circumstances, hang out at tables and chairs watching television in your garage.

After egging him on about his snobbish roots for quite sometime (in the most pleasant and wifely egging on of ways!) and listening to his retaliation that it was fine that we set a table in the garage, but that while we were at it he was bringing our bed down, setting up a television and would plug a floor lap in for effect...he finally conceded to my pleading.

And then guess what...

NO ONE SAT IN THE GARAGE!

We had a nice party...Ava was all smiles and thrilled and I was so excited for her. Everyone brought very sweet gifts, with each one lighting up her face just as much as the one before.

We said goodnight, went to bed and woke up on Monday, which was her actual birthday...Scott, Ella and I gave her our birthday gifts on Monday, and then I packed the girls up and drove to this place that has bounce houses and big blow up slides, a 25 minute drive from the house.

It had closed down!!! Just recently.  Of course. (For friends in Buffalo, Bounce Magic on Niagara Falls Blvd. is no longer in business!)

Fortunately my sister was going to be meeting us and called an immediate plan B, which involved going to Chuckie Cheese because it was 5 minutes down the road...

After almost 3 hours at Chuckie Cheese we went home, took a nap and invited our neighbors to Applebee's for dinner with us. I figured they (as in the wait staff at Applebees) could do the cooking, clean up and singing for one round, right?!

It was quite the day. 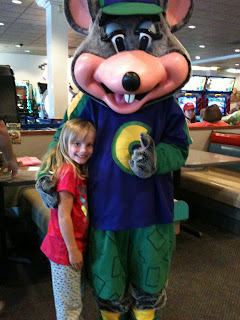 Tuesday night we had Bible study. And here we are at today....with me, up until 15 minutes ago staring blankly at a computer screen trying to figure out why it seems like I never have time to blog, or write, or read anything of depth anymore...and then when I do have a few minutes, why my brain feels like someone has syphoned out all of the creative ideas and has erased all chalk marks from my blackboard...I eventually conceded to blog about the only thing my brain could summon up...birthday talk.

If all that wasn't enough, I somehow convinced myself that it would also be a good idea to throw a kids-only princess party for Ava on Saturday.

You see, in February we tried to celebrate Ella's birthday by inviting a couple of her friends as well as our entire family to one party at our house...our small kitchen, no dining room house.

So, I knew I didn't want to do THAT again.

I was wise enough to decide that we should have TWO parties instead.

Still trying to figure out if that was wisdom or stupidity.

Next year I think we'll scale it down. But for now, 2 parties down 1 to go.

I caught a google article the other day about the Queens 4-day Diamond Jubilee celebration...I think I subconsciously must have been channeling ideas from the Queens event planners when I started planning Ava's 5th birthday celebration...I mean really, they are of equal importance after all.

Would love to know what other parents do, or what you remember as a child.

For the record, we had boxed sheet cake, a small group of family over and sometimes a friend or two.

I'm beginning to see the beauty in that...

In all reality, I hope Ava has some great memories of her fifth birthday...actually...enough to last her until she's 16...maybe I'll be ready to throw another party then!