Like how I put those quote marks around "vacation".

I laugh because it's really kind of humorous how un-relaxing anything is with kids.

I mean, if I were looking at the situation from the outside, it would be really pretty funny.

Like when my sister-in-law comments on my blog posts and tells me how funny they are...that kind of funny...Lin, I love you. You're one of the reasons I keep writing these posts...you remind me that it really is kind of funny after all.


I also find it interesting that with each new experience Scott and I encounter as parents, there is a greater depth of understanding for my own parents, for parents in general, and for just how much energy and effort all things parenting can involve. And how so very, very little you know or can even attempt to comprehend about it all prior to having children.

I still think back to a conversation I had with an acquaintance while we were living in Massachusetts. I was pregnant with Ava and she asked how I was doing and then said something that I thought was very silly.  She said, "Being a parent is going to change your life."

Oh lady. Really. That's all you've got for me. Of course it's going to change my life. I mean it is a baby after all. Don't you have something more insightful or profound for me there.


If I were about to have a conversation with a 29 year old girl who was about to have her first child, know what I'd say to her now...

Realizing, while I'm saying it of course, that she's probably thinking I'm pretty lame and that of course she knows the baby will change her life.

How much...now that's an entirely different question all together.

Even how you take vacations.

We just returned from our first "family" vacation this morning. "Family" meaning just our immediate family  in this case; Scott, myself and the girls. And by vacation I mean a mini, two night, 2 1/2 day trip in which we did not travel very far from the house.

It was fun. It was tiring. We learned a lot about what we like (as well as what we don't like!) while we're on trips.

We figured we’d start out short, both in distance (we drove to Erie, PA which is only 1.5 hours from Buffalo) and in time (two nights), which was probably smart in retrospect.

There was the initial plan which was to leave on Monday morning, head to Erie, PA to an indoor water park called Splash Lagoon, stay at the Holiday Inn Express attached to Splash Lagoon for two nights,  spend most of Monday at the water park, Tuesday at a nearby state park with supposedly nice beaches and then head home Wednesday morning.

And then there is what we actually ended up doing...

Which was spend Monday night at one hotel and Tuesday night at another....because Scott's got the heebie jeebies from the hotel...which was part of our learning process....that staying in a hotel, attached to an indoor water park, right smack dab of off Interstate 90 (like so close that you could probably hit Splash Lagoon with an apple core if you decided to throw it out your window while traveling past Peach Street in PA) would not make us feel like we were creating exactly the idyllic family vacation memories that we had set out to create.

Or, more specifically, to use Scott's words...we would feel like we had taken our kids to a truck stop for a two night stay.

Scott has a way of phrasing things in just the right way that you burst out laughing first because it is so funny, and then again because he has so accurately described the situation in a way that you hadn't even considered it that you find yourself forced to laugh at the entire thing all over again.

Staying at a hotel on Peach Street in Erie, PA feels a little like staying at a truck stop. Plain and simple. The view outside of our window was of a concrete parking lot. There was no grass to be seen anywhere, but there were a lot of, well, um, very interesting people in bathing suits roaming the hallways.

Ava LOVED it. Every stinkin' minute of it. By the second night when we were driving to our new hotel she was asking to go back to the water park.

We spent many hours on Monday riding down water slides and playing in "family" hot tubs and kiddie pools with Ella. We "splashed" from 12-2:45, and then again from 4:00-6:30 and then again from 8-9. (You should have seen the look on Scott's face when I told him we needed to put our bathing suits back on after dinner at 8 p.m....haha...now that was funny.) 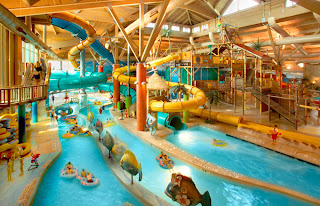 The girls fell asleep, Ella on her air mattress, Ava in one of the big beds and Scott and I sat on a very uncomfortable couch reading magazines and looking for new hotels.

The up side of this hotel was that we a) were able to book a "suite" (I don't want you to get any fancy ideas here, this is a Holiday Inn Express we're talking about), which meant the bedroom and living area were separated by a door...a BIG plus if you have little kids, who a) take naps and b) go to bed before you.

The other upside was that there was a free "breakfast"...haha...you like those quotation marks again...there was a free breakfast if you like crusty fake eggs, greasy sausage patties, pancakes that shoot out of a little conveyor belt, fruit loops and cinnamon rolls.

Don't get me wrong. Kids LOVE this kind of food. Me, well I ate a Luna Bar in the car on the way to the beach.

After breakfast we made a 45-minute stop a Wal-Mart to buy snacks for the beach, beach toys we forgot to pack, swimming trunks for Scott, and food for the place we were going to be staying that night so that we didn't need to go out for dinner and then spent the day at the beach.

The beach was nice...Scott flew a kite, Ella had fun digging in the sand, I picked up a bunch of little beach stones to make some sort of crafty memento out of (any guesses on when I'll actually get to that?!) and Ava and Scott practiced swimming and sticking their heads in the water.

The girls also fought about who got which snacks, who should sit on which towel, where the best places to enter the water were, and started handing me their own "shells" they had found which I quickly realized were discarded pistachio shells from a former beach guest. Ew.

We stayed for about 2 1/2 hours and then packed up to go find our new hotel.

At which point we almost ran out of gas so Scott said we couldn't turn the air conditioning in the car on even though it was 95 degrees, and then the GPS took us to not one, but two closed down gas stations, and then we drove through what must have been the seediest part of Erie, PA giving me heart palpitations that we were moving from truck stop hotel to ghetto hotel.

It all turned out in the end.

We found our way to a lovely little lakeside hotel/campy motel/ bed and breakfast (without the breakfast) kind of place with trees, a small swing set, a pool, and a very cool wooden staircase built all the way down to the lake.

We napped (well, Ella did). We swam. We ate spaghetti and jarred sauce for dinner.

I think the funniest moment of the entire day was when Ava told me she was going to look for a bowl for her crackers and came in from the porch of the room we were staying in (picture back apartment of a house with a wooden deck porch of the front) and said "Mom, I found the PERFECT bowl" and then confidently and proudly displayed the glass ash tray she had found on the front porch.

Scott and I sat in the gorgeous wooden adirondack chairs overlooking the water for 2.2 minutes until the girls started fighting about who was allowed to sit where, how you should place grass on your head properly, and all sorts of other ridiculous things which Ava wanted to be the boss of and Ella wanted to have nothing to do with.

I rolled my eyes about 72 times. Scott grunted 64 times. And we finally made it to 8:30 p.m. when we could put the girls to bed and were finally able to relax on the small porch in wooden chairs, so darned tired that we had little to say to each other.

Lesson Learned: well, I'm sure you've figured it out by now...It's not about us.

We had bagels the next morning, and canned pears. We walked around the grounds again. We packed up and drove the 1 1/2 back home just in time to get Ava to swimming lessons.

I'm still doing laundry and unpacking, but it was well worth it.

In the future we're thinking beach cottage somewhere for 3 nights where we can stay without packing up, have the girls play and nap at their ease and perhaps not feel so truck stoppish...but we'll see...Ava will probably be asking for the water park again, or some place with rides that make me sick to my stomach, or with life sized animals that walk around all day long.

Lesson Learned: you've got it...it's not about us, it's about the kids at this season.

And, all in all, the funny moments and bonding and memories created totally outweigh any tiredness, or frustration that Scott and I felt. The girls are still thanking God for our "vacation" when they say their prayers. Pretty cute.

And Scott and I are looking forward to our all expenses paid trip to Bermuda next month where...well, it will be about us for a couple of days, and that's a good thing once in a while!