A Poem on Parenting by Mary Karr

I'm not typically a big poetry person. I won't lie, it can tend to make me feel a little stupid-- like I missed the boat somewhere. Or, at least missed the English classes on how to understand ambiguous phrasings of words meant to lead to higher understandings of life.

After all, I was an English major and have a master's degree in a writing related field, aren't I supposed to just get these sorts of things?

Frankly, the truth likely lies in the fact that I'm not a very patient person either. I want my dose of information straight up-- let's not beat around the bush. As you've likely picked up from my blogging, I'm a pretty honest cat. No fuss, just the honest guts. It gets me in trouble sometimes, but it's who I am.

So anyway, I was quite pleasantly surprised when I really found myself enjoying a collection of poetry recently. 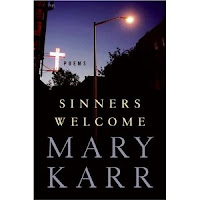 The collection is called Sinners Welcome by writer Mary Karr. I borrowed this book as well as her recent memoir Lit from the library prior to the Festival of Faith and Writing. I hadn't read anything by Karr and wanted to see what she was all about before hearing her speak at the festival.

Karr had an incredibly difficult and crazy childhood; all the horrible things you might imagine that would make a childhood hard, plus some. Her first memoir, Liar's Club, recounts many of these stories. I started to read it, but as the sensitive mother of two small children found it too difficult. Lit is about her later years, college and early parenthood-- I find it easier to read about adults inflicting bad decisions on themselves rather than adults hurting children, and have enjoyed the memoir so far.

Her collection of poetry seems to capture many of the raw emotions from her life experiences in short soundbites. They do not come across as archaic and ambiguous to me, just real, and deep and well put. The way I like poetry.

Here is my new favorite poem by Karr. It has appeared in the New Yorker among other well known publications.  It seems to capture the grit and grace of parenthood, the beauty and the chaos, the fact that we cannot control our children's every move,  just try our best to guide them in the ways they should go and hopefully, someone will someday say, "Nice kid."

Let me know what you think!


A BLESSING FROM MY SIXTEEN YEARS' SON
I have this son who assembled inside me
during Hurricane Gloria. In a flash, he appeared,
in a heartbeat. Outside, pines toppled.
Phone lines snapped and hissed like cobras.
Inside, he was a raw pearl: microscopic, luminous.
Look at the muscled obelisk of him now
pawing through the icebox for more grapes.
Sixteen years and not a bone broken,
not a single stitch. By his age,
I was marked more ways, and small.
He's a slouching six foot three,
with implausible blue eyes, which settle
on the pages of Emerson's "Self Reliance"
with profound belligerence.
A girl with a navel ring
could make his cell phone go brr,
or an Afro'd boy leaning on a mop at Taco Bell --
creatures strange as dragons or eels.
Balanced on a kitchen stool, each gives counsel
arcane as any oracle's. Bruce claims school
is harshing my mellow. Case longs to date
a tattooed girl, becase he wants a woman
willing to do stuff she'll regret.
They've come to lead my son
into his broadening spiral.
Someday soon, the tether
will snap. I birthed my own mom
into oblivion. The night my son smashed
the car fender, then rode home
in the rain-streaked cop car, he asked, Did you

and Dad screw up so much?
He'd let me tuck him in,
my grandmother's wedding quilt
from 1912 drawn to his goateed chin. Don't
blame us, I said. You're your own
idiot now. At which he grinned.
The cop said the girl in the crimped Chevy
took it hard. He'd found my son
awkwardly holding her in the canted headlights,
where he'd draped his own coat
over her shaking shoulders. My fault,
he'd confessed right off.
Nice kid, said the cop.
Posted by Lisa at 3:33 PM