"I had expected ordinary, and I got extraordinary. Isn't that just like God? You may not know what's coming in life, but it wouldn't be any fun if you did. Plus, you might refuse to participate because what if you got hurt or couldn't control most of life, which you can't."
(quote from: Stepping on Cheerios) 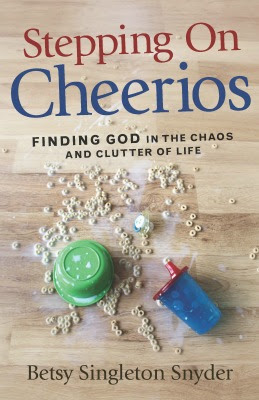 After having triplet boys at the age of 47 Betsy Singleton Snyder found herself at home, with four little boys (she had one son already, when the triplets arrived), trying to figure out how to manage life, count her blessings (all of them!), and continue to connect with God in the middle of the chaos.

Betsy's book, Stepping on Cheerios, is all about leading and embracing an unconventional life--even if you didn't intend to! The book is an honest reflection of the joys, challenges and questions that arise when we jump into the deep end of raising children. It's about  learning to embrace our uniqueness, our children's uniqueness,  and who we become as a family-- all different, individual and unique, but called to work together as one (kind of like the body of Christ!).

I found Stepping on Cheerios to be hilarious, truthful and authentic, with a good dose of encouragement and reminders to continually look for God in the middle of "it all".

The casual and witty tone with which Betsy talks about everything, including faith and Jesus, might feel irreverent to some readers. While there were moments that it pushed the envelope for me, I was willing to come along for the ride and embrace the candor because I found much of the sarcasm about our culture to be spot on (we Americans have some pretty crazy pop-cutlure, so why not be flagrantly honest about it, right?!).

I really enjoyed Chapter 5: Whoever The Kids Are, They Are God's, where she talks about embracing  her kid's interests, and letting go of our ideas for them in the process. Her boys, for example, all decided to try ice-skating and really liked it. "Its ok if your boys like ice skating or dancing, and it's OK if your girls like building things and playing with trucks. Dang. I always wanted a slot car racetrack," she says.

Lesson learned: let your kids be who they are. More importantly, let them be who God designed them to be! Snyder points out that Jesus wasn't a follower of cultural norms himself.

"Let's be honest," she says, "Jesus hung out with anybody, like anybody...Jesus would literally eat with anyone, and it goes him in trouble with certain religious authorities, and it might get us in trouble. I'm pretty sure that Jesus would get some haters on Facebook with all his jazzed-up coloring outside the lines...I'm love Jesus precisely because his ministry startles our comfortable settled lives."

Can you really say "haters on Facebook" in a sentence about Jesus? It wouldn't have crossed my mind, but I do love that Snyder pushes the boundaries here! It's truth, isn't it?


Among other significant points, Snyder  also reminds us why parenthood is an important part of re-shaping our stodgy adult thinking:

"We grown-ups sometimes forget how much childhood matters," she goes on to say,  "It's filled with the sacred and it is not to be missed when it comes around again during parenthood. And parenthood is the time of spirit formation in which we don't realize until later that everything kid-drenched around us was and is a gift."


I have found this to be true in my own parenting over and over again...the irony, that God makes us parents just around the time that we have forgotten what it's like to be a child. To jump into pools with total abandon, to let a dog lick your face without pulling away, to see the beauty of a dandelion without calling it a 'weed'...and so much more.

Stepping on Cheerios is a light and witty read reminding us to continue to appreciate these wild and crazy moments. It's a book that reminds moms that Jesus isn't too busy for our sippy cup and goldfish cracker lives-- "Isn't it just like God to show up where you're working your tail off? Jesus met people in their workplaces and in their homes. Jesus came to Peter, James, and John, who were busy fishermen, trying to mend their nets. Jesus met a Samaritan woman who was trying to get water for her home. Jesus met Matthew in his little tax booth...God is a very involved parent, so don't ever think you've got to line those rubber duckies up in a neat row before God is swimming with you."

This is a fun book for any mother in the "thick of things" who wants something light-hearted to remind her that she is doing a great job. But, it also serves to compel moms (or, parents in general) to re-look at some of the things we deem as normal,  and to think about how we are pointing our kids, and everyone we meet in the process of raising them, towards Jesus. 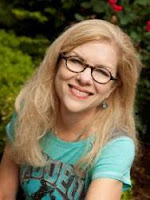 Betsy Singleton Snyder, author of "Stepping on Cheerios," is a pastor, a former missionary to the arts community, writer, and blogger. She and her husband, Dr. Vic Snyder who formerly served in the U.S. House of Representatives for 14 years, live in Arkansas with their four sons, Penn (10), and triplets Wyatt, Sullivan, and Aubrey (8).

You can read more about Betsy at https://www.womenadestand.com.