When We Miss the Marvelously Mundane 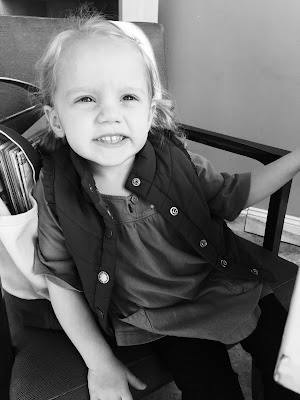 Just a few mornings ago my two year old grabbed my hand and begged me, implored me, nudged me and eventually tugged me away from the kitchen where I was wrapped up in the usual morning grind with unrelenting perseverance to finish the tasks at hand (just one clean spot in the house, just one!) .

"Come on, Mom! Come upstairs with me. I want to show you something!" she said, looking up at me, as her small hand grabbed first at my leg, pulling me away from the sink, and then reached up for my hand.

I held my ground for a minute. I kept my foot firmly planted in front of the sink and almost muttered those words that all mommas utter more than they mean too..."Not right now honey...I have to finish this first."

Oh, but one look at that face. That face! She gets me every time. The dancing blue eyes, the cheeks, the persuasive smile, the way she so eloquently expresses herself at 2 1/2...She was being incredibly persistent, not backing down. Momma, you're going to pay attention to me now! every part of her seemed to be saying.

"Momma, I have something to show you!" is what she said instead...a game we often play.

Sometimes the "something" means she cleaned her room (well, kind of). Sometimes she has lined up her stuffed animals. Sometimes she has pulled every last thing out of her bed, or every book off of the bookshelf and has thrown them into a haphazard pile on the floor. Those are always the funniest "surprises".

"Wow, honey...um...wow. That's...a...That a great great pile you've made there!" I'll stammer as she beams proudly and I conjure up how we'll gracefully clean this mess up at some point later today...maybe.

On this particular morning, the "something"  was a carefully constructed pyramid she had crafted out of a set of Melissa and Doug puzzle blocks. The blocks were carefully stacked, six at the bottom, then five, four, three, two, all the way to the one at the top. She and I had made block towers before, but she had never done it by herself. It was quite impressive, actually.

I was delighted to have seen it, and simultaneously reminded myself that I had almost missed it.

I almost said no.  I almost told her that I needed to finish the dishes first. By that time she would have been onto other things, or would have knocked it down, or would have forgotten about the thing all together.

While a block tower is not monumental by any means, it was significant in her day, and it was a moment she wanted to share with me. A moment away from the grind. A moment to focus on her playfulness, her creativity...a moment that said, without a spoken word, that she IS absolutely more important than the dishes.

As she led me up the stairs, holding tightly to my hand, I found this question rattling around in my mind...How often does God, in the same way beckon me away from the grind. How often does he say, "My love, I have something to show you, come this way."

How often do I actually miss what he wants to show me because I plant my foot on the floor just a little bit harder and play the mommy martyr card? "But these dishes, and this laundry, and these floors, and the grocery lists, and the lack of sleep, and the dust, and the very dirty mudroom...God, did you see the water marks on the hardwood floors in that mudroom... from the gritty, grimy snow boots that have been in and out ceaselessly this week? I must not stop!"

Sometimes He is extra gracious with me, and persistent. He tugs at my leg and then takes my hand and pulls me away, and I am always, always, thankful for it.

But sometimes, I wonder if I've missed it.

Missed the chance to take in the snowcapped trees, and their massively reaching arms that seem to be reaching out to the sky in praise. Or, the chance to have a meaningful conversation with a mom I kind of knew, but hid from, in an aisle at Target. Maybe I missed the chance to hear one of my children sing, or dance spontaneously because I was tirelessly pursuing productivity. Maybe I (gulp) squelched someone's desire to sing when I pushed us all too quickly to move onto the next thing, rather than just...staying...in...the...moment...just...a...little...bit...longer.

I know I write (and talk!) a lot about this very topic. Sometimes I'm tired of hearing myself say the same things over and over again...the broken record spinning in my head. I hope I don't sound entirely like a broken record to you. If I do, forgive me.

Maybe, just maybe, one of these days I'll get it. I'll be that lady who can write about how she  takes in every magnificent moment of the day, from the sun slowly peaking up over the horizon in the morning, to the gloriously beautiful sight of those sleeping faces, innocent and sweet, that I pray over before I go to bed at night.

Someday I'll arrive at the zen, the focus, the true practice of the presence of God as much in the middle of the overtly glorious as in the microscopically minute and mundane moments of the day.

But, until then I'm a total piece of work. A piece of work in progress, which is, ultimately and hopefully, a good thing.

I'm a slowly sanctifying, fitfully faithful, blissfully blundering, hot mess of a momma on many days who is trying my best to manage this thing called life and motherhood as gracefully as humanly possible.

And, I suppose if I had it all figured out, I wouldn't have much to write about...and that wouldn't be any fun after all (;