Top 10 Things I Love About My Husband, Part 2

I was shooting to post this by the end of the day today, and somehow have made it...the second half of my top 10 list!

We may not be talking gourmet meals here, but the man can make a darned good chicken (or eggplant!)  parm and an even better apple pie. As a matter of fact he made a big pie dish of apple crisp the other night while I was working on Part 1 of this post. It was YUMMO!

Scott is also very well known (around these parts!) for his waffles, pancakes, omelets, chocolate chip cookies and mashed potatoes. He can also make a pretty mean bucket of veggie risotto!

The girls now know Saturday morning as pancake and omelet morning and look forward to it all week! I'm not a big pancake girl, but I will admit that his are very good...His omelets, they are to die for!!! Carmelized onions, broccoli, peppers, zucchini...whatever we have in the house sautéed perfectly and added to perfectly cooked eggs.

He has created such a reputation for himself that my sister recently asked if she could reserve a seat at our counter on the morning of her birthday in February so that she could start the day with one of his omelets. He's also become the go to pie guy for family holidays...Scott's coming, "Can he bring a pie?" Why sure! I'll bring my soggy green bean casserole and Scott will marvel everyone with his delicious apple pie.

Alright, I don't say it aloud very often (though I probably should) and it makes me feel a little school girlish, but my hubby is a handsome guy. He's got the best hair, big blue eyes and looks great in a suit. He also looks great slightly unshaven in a pair of jeans and a gray or blue henley long sleeve t-shirt. His big blue eyes were one of the first things I noticed when I met him (I was his waitress....that is another story entirely!) and they left a lasting impression (obviously!).

He says the cutest thing to me all the time..."Babe, after all this time I still think you're pretty cute!"

I don't say it nearly enough, so here goes..."Babe, after all this time I still think you're pretty cute!"

#3 He's Handy Around the House AND Washes Floors

I'm sure he would not say that he is the ultimate craftsman, but he is willing to tackle or at least try any house project once, and is a quick study. In the ten years that we've been married he's installed windows, doors, floors, trim...all sorts of home improvement projects. Sometimes they take a little bit longer than expected, but they (mostly) eventually get done.

He is also incredibly good about washing the floors, and I must confess I haven't had a good reason to stop him (why mess with a good thing, right?!). I'm the picker upper around the house and he is the floor guy. I'm not sure how that started, but I'm not complaining (if I'm totally honest I don't really love washing floors...). I know a lot of women gripe about how their husbands aren't so helpful in the domestic realm...I would never, ever say that. Scott is super, duper helpful and I'm super duper thankful.

I must give a shout out to his mom here because she taught him everything he knows about sorting laundry and cleaning floorboards! Thanks Nance!!!


#2 He is a Man of Strong Moral Conviction

Scott and I both hold our faith in God to be a first priority in our lives. It guides our relationship with others, it sustains our marriage and it is a strong part of the foundation that we are working to lay in our girls lives. Scott will be the first to tell you that we live in a messy world and that everyone needs Jesus in their lives. Amen to that. There is nothing I love more than to look over at the couch on a random morning where he's gathered all three of our girls and is reading them a story from one of the children's devotionals or Bibles that we own. We always pray before dinner and before bed and we're trying to teach the girls how to pray on their own. Church is a big priority for us on Sunday mornings (though that's been challenging with the baby lately!) and it always will be. I feel incredibly blessed to have found a partner who is on the same page as me in such important matters of the heart and our spiritual lives.

#1 He is an incredible father who is fun loving and spontaneous.

Alright, so here is the picture that inspired this Top 10 list in the first place...the moment that left me thinking about how lucky I am! 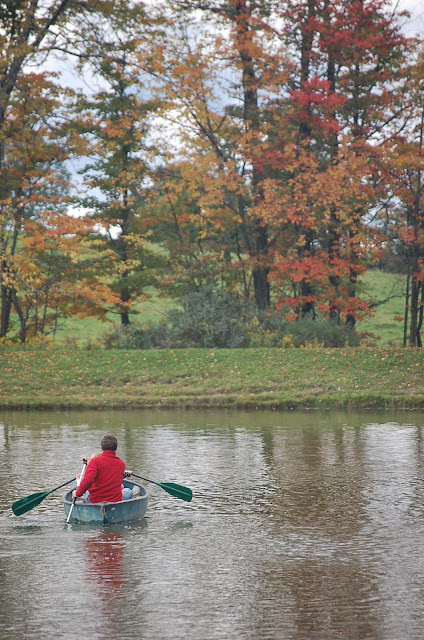 So, here's the story. It was Sunday morning and we had spent the weekend camping. It was a wet weekend and we hadn't spent much time outside doing fun or "campy" things, though the girls had had a ton of fun playing with their cousins anyways.

Checkout was 11 a.m. and my sister had already left with her boys (it was about 10:40ish). I had taken the girls for a walk while Scott loaded the car and then asked if he wanted to take them for a quick walk before we left. Aubrey was finishing up a morning nap (which was going to make all of our lives easier on the way home!) and so I hung out at the cabin while they went for their walk. At one point I decided to walk across the road and peek up over the hill to see if I could see them around the pond. Instead of seeing them walking I saw them...in a canoe!!!!

I would have never been so spontaneous to ask the guy at the dock for a canoe and life jackets 20 minutes before we were supposed to check out!!! I LOVE that Scott decided too!! He is incredibly fantasitc when it comes to living life to the fullest and making the most of opportunities. I do that too...sometimes...but my "to-do" list can often distract me. He's Mr. Go With the Flow 'lets jump in a canoe'!!

When I looked over that ridge and saw them paddling away, that is the moment I said to myself, "THIS is why I married this man. I love him to pieces!" 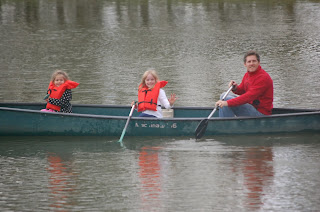 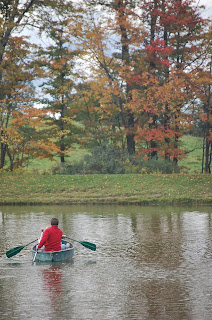 And so there you have it. I realized as I was writing this that I could probably come up with another ten or twelve more, but I'll end here for now because it's late. If you've never done a top ten for your own husband you should give it a try-- it was a total joy for me to write and even more fun to read aloud to Scott. If you're anything like me we don't say the things we think or mean to say nearly enough to those we love, so give this a shot and see what happens.