The day started out a bit dreary. Ava has had a flulike virus for days, Buffalo weather has been a bit  blah (surprise!) and several night wakings from both girls left me feeling more than a bit slow even after my morning coffee.

I typically carve out a couple of hours of writing time when the girls go to preschool, but with Ava sick, we didn't make it to school on Monday and my hopes for today were dashed when she slowly descended the stairs groggy and teary-eyed, quite evidently not ready to go back to school just yet.

After coming to terms with the fact that plan A (school and some coffee time at Starbucks) was out of the question, I reconciled myself to plan B-- a spontaneous muffin making endeavor (it was either that or throw the rotten bananas away), a slower paced breakfast and time to throw some dinner in the crock-pot (not such a bad alternative actually!).

But perhaps the best part of my morning was the often unexpected guest of some extra time at home; a good ole dose of silliness and laughter from none other than our resident funny person...Ella.

You need only to encounter Ella for a few moments before you realize just how funny she is...nothing major, just lots and lots of little things making her one of the funniest people I know.

She sings loudly and haphazardly for all to hear, she runs around in dresses, with frizzy hair shouting made up words. She says things like "bummer" and "aw shucks" at the most appropriate times making said things seem like not such a bummer after all.

And then there was this morning. She was walking around the kitchen with a thickly pasted purple mustache created by the very deliberate way she drank her fruit shake.  The top to her pajamas, size 24 months and far too small (they should have gotten put away by now, she is 3 after all!) but chosen adamantly before bed last night, inched far above her belly button as she bellowed loudly things like, "poodie doodie poodie! poodie, doodie, poodie!!"

I have NO idea what that means. I don't think I'm supposed to, but her vivaciousness and the confidence with which she spoke the words seemed to break through the tired malaise of the morning.

"Ella, what planet are you from?" I asked with a smile.

"Northland!" she declared confidently and loudly and then stood laughing at herself.

I looked at Ava, raised my eyebrows and shook my head. She looked at me with a smile and shrugged her shoulders, as if to say "She's just crazy mom."

Now she had an audience...She continued to wander between the kitchen and the living room, from me to Ava (both of us needing the laughs).

Not sure if that is baby talk or gangster talk...either way, pretty silly coming from a purple lipped 3 year old.

She continued this kind of silliness for several more minutes until I chased her down for a photo at which point she suddenly became shy and hid behind a chair in our living room. I told her I wanted to show Nanner (her grandmother) a picture...so obliged...very briefly. 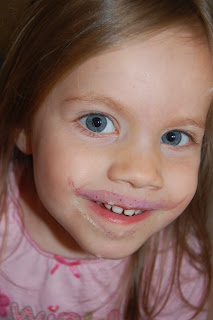 Did you know that laughter reduces the levels of stress hormones in your body? That it increases the antibody reducing cells, thus strengthening your immune system? (It does all this and more according to Elizabeth Scott at about.com).  Who knew?

I haven't had a chance to blog much lately, I haven't cleaned much this week, there are piles of wrinkled clean laundry jammed into baskets in the middle of my living room. I haven't called the people I need to call, or mailed checks I've needed to mail because Ava has been sick and life has been busy.


I was feeling a little down about all I hadn't gotten done...and then I laughed.

Suddenly, despite all of those things still needing to be done, the mood was lifted. I think Ava felt a little better as well...We laughed and we felt better.

I guess what they say is true...Laughter IS the best medicine.

Fortunately we have a little laughter medicine woman living right in our house.