I live with a bunch of garbage pickers.

I bet you have them in your house too.

Truly. Nothing will get an old toy more attention than sneakily trying to get rid of it by putting it in the trash can.

I've put this in the trash can three times in the last two days. 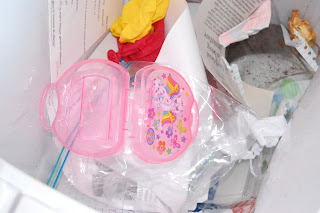 It somehow keeps reappearing on my kitchen counter when I'm not looking.

Either there is a ghost in the house who has decided to show its presence.

Or...one of the little monkeys that I feed and take care of daily keeps finding it while digging for food and other treasures in the trash can.

I mean, I know I deprive them of a lot, but I do give them new toys on occasion (on more occasions than I'd like to count, actually!).

It's kind of funny really. I can't tell you how many times I've gone on rampages late at night to clean out our toy room, or that I've collected the plastic shenanigans from Happy Meals from around the house (I know, I know, my fault for feeding them McDonalds in the first place...I can FEEL your eyes glaring at me...um...Lindsey...) and I go to throw them out because I'm on a mission to straighten, and simplify and lighten our load of plastic shenanigans around here.

I've thrown things in nondescript plastic bags and have tied them up. I've hidden them carefully under dirty paper towels and cardboard and old cereal boxes in the trash can. I've tried to bury old, torn, yellowed books under piles of newspapers in our recycling bin. I mean, I WORK to try to hide some of this stuff in the trash.

They ALL reappear on the kitchen counter within hours.

For example, today's item. The small, dollar store, pink, plastic suitcase that held tiny, crappy, markers that I gave to Ella a couple of days ago on her birthday...mostly just to entertain her for a couple of hours in the morning.

The markers were apparently a one use sort of thing (who knew?!) so I threw them out first and then the container. Twenty minutes later I hear,

I let her put in on the counter and plan to throw it out at nap-time.

I throw it out at nap-time.

An hour and a half later while I'm making dinner I ask Ava to throw something in the trash for me.

"MOMMY. How did THIS get in here. This is Ella's. Who keeps throwing it out?"

Shucks. I should have buried it deeper.

I throw it out again while I'm cleaning up after they go to bed the other night.

I find it on the counter while we're making breakfast the next morning.

I take that darn piece of pink plastic and shove it as far down in the trash can, through slimy, dirty, coffee grindy nonsense, as I can.

It has yet to reappear.

But, I'm sure something else will soon enough.

It's kind of funny really. I'm amused by the things that amuse me these days.

Do you have garbage pickers at your house?! Do tell.
Posted by Lisa at 5:38 PM