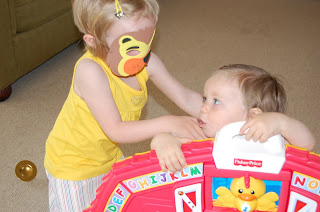 "ELLA. NO!!! Those are MINE" ( fighting over Cherrioes spilled on the floor...who knew that was a hot commodity?).

"ELLA. NO!!! That is MINE" (Any given book, toy or general household object at any given moment of the day. Usually an object that Ava has NEVER had an interest in until Ella is holding it).
"ELLA. NO!!! YOU ARE NOOOOTTTT ALLLOWWEDD to DO THAT!" (a response to Ella climbing up stairs, opening toilets, trying to climb onto the kitchen table, trying to sit on her sister's doll house....)
"ELLA. NO. NO. NO. NO NO" (Just a general frequent cry of anguish which can emerge at any point during the day).
The above are snippets of the dialogue in my house MANY moments, every day, all day long. I won't lie, it drives me a little crazy, but sibling rivalry is par for the course once there is more than one child, a.k.a. a sibling.
Ella is into EVERYTHING and Ava is 3 which makes her the police of all things hers and all things Ella should not be doing (according to Ava).
So, if you were to ask me, "Lisa, what is one of the major differences in your life now that you have two children?"
Part of my response would include that added to all of the other hats you wear as a mom, referreeing is the newest role that I did not expect to have to play-- at least not so soon (I thought it came when they start fighting over clothing in their teenage years!). 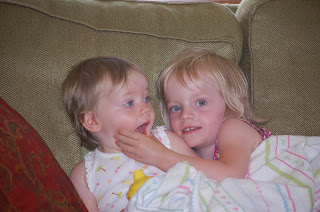 After Ava says "NO" to Ella on most occasions there is screaming on Ella's part because she is at the age where she hates to hear the word "NO" and she is realizing that she doesn't like her sister to be the boss of her (which her sister often thinks she is!)...so she is starting to cry and swat and scream back in retaliation.
Then there are the moments when Ava will tell me point blank that she just intentionally physically harmed her sister in some way at which point Ella is often usually crying as well. Those moments usually start like this:
Me: Quietly having snuck away for 10 minutes to get dressed, or clean the kitchen or put a little make-up on so that I don't scare friends and family who might stop by the house, will usually hear nothing for the first 7 minutes and then, almost always, a loud anguished cry coming from Ella...
"AAAVVVAAAA! What did you do to your sister?!!!"
"I kicked her." (Or hit her, or pushed her...yesterday it happened to be "kick")
That is literally what she said to me...Ella was trying to walk up the stairs from our backyard into our house right behind Ava which Ava did not like because Ella was obviously too close.
"You what?" I had to make sure I heard that right...I mean, you don't usually say so matter of factly, like you might if you were telling someone you just ate dinner or had a glass of lemon-aid, that you kicked another family member.
"I kicked her."
"Up to your room NOOOOWWW!"
Ava usually doesn't so much as even bat an eye to my sending her up to her room for these things because she knows what she did was wrong...apparently the impulse was just to strong to care. 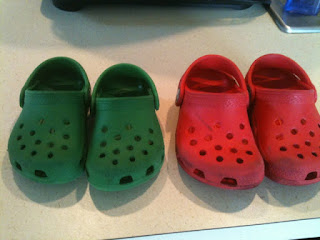 There are other ways life has changed as well. While having two may not mean "double" the work per se (I'm already cooking meals, doing laundry, and cleaning the house ANYWAY ,what is one more mouth to feed or person to clean up after?), there are double the requests throughout the day, double the sippy cups that seem to constantly need to be filled and found, double the shoes, double the whining on some days and double the chaos when eating meals at a restaurant. There is sometimes double the chance you're going to have to get up in the middle of the night (though that is getting much better!), double the runny noses, and double the doctor's appointments. 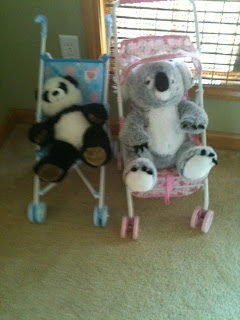 Lately, now that Ella is at a stage to want everything Ava has and Ava at a stage where she doesn't want Ella to have anything she is playing with, there often needs to be double toys; like now we have two strollers so that both girls can push them at the same time without causing another need to have a cat fight!
All that said...
There are also double the smiles, double the laughter, double the creative minds doing things that fill your heart with adoration for your beautiful offspring and moments when my "double trouble" cooperates with one another to do the cutest darn things in the world...like making animal noises at each other, playing ring around the rosie or hide and seek.
I LOVE nothing more than when Ava does something to either help Ella, make her laugh, or help her figure out something she is trying to do. The cutest thing lately is that Ava has been "reading" books to her sister...I wish it were like that ALL the time...but, well...is that really realistic?...I mean, I didn't love my sister or my brothers ALL the time when I was growing up...there were cat fights and even the occasional hair pulling, hand swatting match...
I am working on talking to Ava about loving her sister. On asking her what she thinks she should do in a given situation, and even more importantly asking her what type of action she thinks would make God happy...how does God love others and how does He want us to show that love to others, particularly our family members? 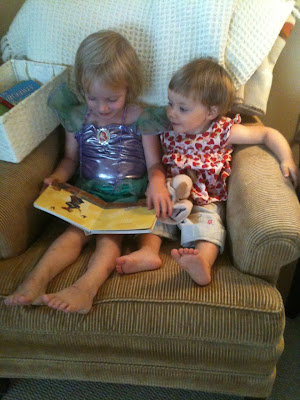 When she wants too.

If Ella falls or gets hurt on her own accord Ava often grabs a binky and Ella's doggy and brings it over to her. She says, "Ella babe, it's o.k." and gives her a kiss on the head. She is trying to teach Ella words, she sometimes will patiently show her how to use a toy, she loves to help feed Ella at meal times, and as I said earlier, she has been "reading" to her, which is my favorite thing in the world!
At the end of the day, I'm blessed to have siblings, and so are my girls. I once met an elderly man while I was out taking Ava for a walk. I was quite pregnant with Ella and the man said "hi" to Ava and pointed to my belly asking if another was on the way...
"Oh boy" I said. "Yes there is and I'm not sure what I'm in for."
"Oh, what a blessing" he said. "I never had siblings and it was very lonely."
I was so moved and sad for this man who, now at his older age particularly, no longer had parents and was probably disconnected from or had lost many friends....how much would he have loved a sibling...especially at that moment.
I think about that man when I'm frustrated with the way the girls are treating each other and I realize and say to myself..."This is good. this is the way it should be. they do love each other deep down and by God's grace they will be more than just sisters someday, they will hopefully be wonderful friends."
Posted by Lisa at 7:24 PM