It has been a chaotic morning. If one child wasn't crying they were getting into something that they shouldn't be getting into and vice versa. Non-stop. All morning. Finally, at around 11:45 I announced that we were going out to lunch because the prospect of handling the girls at a table outside of our home seemed more appealing than messing up our kitchen and the table in our home again. So we packed up and drove to Wegmans.

By this time, Scott was frustrated, I was frustrated, Ella was tired and crabby and Ava was in a momentary peaceful mood. Until we got into the car and Scott told her she couldn't have the freeze dried baby bananas and strawberries that I had brought for Ella. Ava wants to eat EVERYTHING except her meals lately. All of Ella's food, anything we're eating, anything she can find in the cupboards, anything except for her meals...it's a constant battle.

So we kept driving (the drive is less than 10 minutes) and Ava proceeds to dump the entire bag of freeze dried fruit into the cup holder of her car seat.

Great. I keep my mouth shut and keep driving, because things have gotten hairy enough.

Ava demands meatballs at Wegmans, which of course they don't have for some reason...so we end up giving her fried rice, fruit and crackers for lunch.

Lunch was relatively peaceful until it was time to go home. Then, Ava NEEDED to use the potty. I took her and the entire process was, "I do it. I do it. I do it." Ugh. She wants to sit on the potty, get the toilet paper, flush the toilet, pull her pants up, all by herself. She is 2 and though she wants to do these things be herself, they are messy, and dirty and she really needs helps, but gets very frustrated when you try to help her.

Finally we make it out of the bathroom and I leave the girls with Scott while I go to get the car because it's cold and snowy outside. While I'm getting the car Ava reminds Scott that we promised her that she could see the Lobsters after lunch. Scott realizes that we did tell her that we would go look at them and so he takes her back to see them, which is all fine and dandy until she sees cookies on the way to see the Lobsters and asks for one and is told no. Here we go again.

I park the car out front and walk to the front of the store where I hear Ava SCREAMING long before I  see her. I grab her, put her in the car, Scott puts Ella in the car and we pull away while Ava is screaming about cookies at the top of her lungs.

I proceed to turn up the CD player as loud as I can. So now we are in the car with a screaming toddler and Scott's favorite blue's artist whaling on his guitar at a very high decibel. Scott is playing air guitar, I'm driving as quickly as I can to get home, Ava is red in the face from crying incessantly and Ella falls asleep in the middle of it all!

I felt slightly guilty about turning the music up to tune Ava out, but you just cannot reason with her sometimes. She just throws these fits of whining and crying that make you feel like you'd rather be doing just about anything else in the world than sitting in the same room, much less the same car. I would have rather been collecting the trash in 15 degree weather, or chopping onions for eight hours straight.

The title of this blog alone likely speaks volumes for our current stage of life experiences. I wish I had a note of optimism related to our experience to help encourage another mom, but alas, all I have is our shared experience.


I did try to start my day on a positive note, before the chaos began and read a wonderful essay in a little book I picked up at Barnes & Noble called "Attitudes of Gratitude".  The essay told the story of a man named Tom who eventually turned to a therapist requesting Prozac for his depression. The therapist instead asked if he'd be willing to try something everyday for a month. In the morning he was to ask himself "What do I feel grateful for about myself?" and in the evening he was to ask, "What did I do today that I feel good about?" 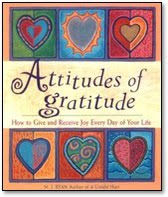 The author goes on to say that "Gratitude makes us feel good because it helps us widen our frame of vision. Under depression or stress we can develop tunnel vision, seeing only this problem and that difficulty...When we experience gratitude we give ourselves a dose of mental sunshine."


So I did wake up this morning and before the chaos began I told Scott I was grateful that the girls had slept in (it was already twenty after 8!!!) and that we had a comfortable king bed to snuggle in with the girls on many mornings. I'm also grateful for the ability to have had two healthy children; I know this is a struggle for many people.


So that is my mental sunshine for the day and I'm hoping it is enough to get me through.