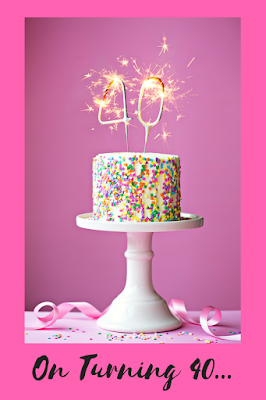 I've been thinking about this moment for months-- the morning that I wake up and am no longer part of the 30's club, but have been ushered into a new decade, seemingly against my will.

I honestly think I skipped some birthdays in the middle there...my 30's were a blur. Seriously.

Plenty of women have promised me that this new club will be good--the 40's club-- they have said that it's fun, that you feel more self-confident, that you feel compelled to embrace your days with more intentionality and a sense of purpose. You do this because you are now acutely aware of the passing of time,  how fast it goes, how the clock ticks relentlessly whether you like it or not.

I'm not sure what to say to that...except that I better keep drinking my green smoothies and jogging 3 times a week!

I do have a LOT of ideas, and oodles of hope and excitement for what this next decade will bring! There are house projects, writing projects, places I want to see, people I want to connect on a deeper  level with, vacations I want to take with my kids so that we can revel in the glory of God's creation!  There are ministries I'd like to get involved in, and groups of people I want to serve.  There are LOTS of ways I want to be more intentional in my parenting and in my marriage. I'm curious and excited to see what God has next for my life...for our life as a family.

So, on this day, this week...these last few weeks...I've been thinking a LOT about how I got here...the mom in my 40's with my baby heading off to kindergarten in two short months. I've been thinking a lot about what that means, and how to make the most of it all. Here are a few of my random thoughts:

I've thought about my 20's...a decade of transition and change.

It was a time of romance, and marriage and naiveté, of celebrations and graduations from undergrad and a master's degree. A time of new jobs, and new houses, and learning how not to just be a girlfriend, but a wife. It was a time of learning, in lots of big and little ways, that your time is not your own-- that you make commitments to companies, and to people and to your family, and you need to learn how to wisely discern which priorities to spend time on and what to let go of.

Scott and I met, fell in love, moved to Boston, traveled to places like England, and Switzerland and Italy, and learned what it meant to come back "home"--how it felt to be back in familiar places and spaces when you have been in the unfamiliar, if even only for a short period of time. We got pregnant the first time, and cried over a miscarriage. We got pregnant again, and had our beautiful first daughter nine months later.

I struggled with bouts of anxiety in my 20's, and postpartum anxiety after Ava. That struggle with anxiety and realizing it had deeper roots-- childhood roots-- ushered me into my 30's and stayed with me until I learned how to reckon with it...until I let God reckon with it. That, my friends, is a whole other story all together. One that I might consider sharing someday.

I've thought about my 30's...a decade of deep lessons, spiritual growth, and learning to establish a new family legacy.

Honestly, my 30's feel like a blur, but I know they are full of blessing. I have to look back at photos, read through old journals, think about each of my girls at their various ages and stages...and then like a dot-to-dot that has 1,000 points to connect, the totality of my motherhood, and our days together starts to re-formulate in my mind into a recognizable picture of a somewhat intentional life. It's a beautiful picture. It's an unexpected picture in many ways. It's God's picture, and He's still working on it.

I've realized that the newness of our 20's-- new homes, new babies, new marriages, new jobs-- it had to make way for rhythms and repetition in our 30's; work, house management, meal planning and preparation, many-many-MANY sleepless nights. There were rhythms with babies and then toddlers that were perpetually changing, and rhythms in our marriage and relationship that needed to be adjusted, and readjusted. We had to find ways to make room for each other, for ourselves, and constantly reevaluate what was and wasn't working.

In her book "A Circle of Quiet" Madeline L'Engle quotes from a book that she read during her 30's called The Man in the Grey Flannel Suit. "What I remember from that book," she says, "is it's reference to the 'tired thirties'.  I was always tired. So was Hugh. During the decade between thirty and forty, most couples are raising small children and we were no exception. Hugh was struggling to support his growing family...and there was I, absolutely stuck in bucology, with the washing machine freezing at least once a week, the kitchen never above 55 when the wind blew...and not able to write until my little ones were in bed, by which time I was so tired that I often quite literally fell asleep with my head on the typewriter."

Sometimes it can feel like you're losing yourself along the way, but I've learned that you're simply becoming a new version of yourself--one that with lots of prayer, and grace, and yielding to God's wisdom, is hopefully a better version anyways (though, and I know a lot of you would agree, the process is not always pretty).

And so here I stand at the beginning of a new decade, a new chapter, and I'm not really sure what to make of it.

A continuation of what we've begun for starters...in our marriage, in our family, and with our children.

In addition to raising these sweet girls, Scott and I are looking forward to re-connecting with some of our personal passions-- with our littlest one heading off to kindergarten in the fall I'm looking forward to investing more time into writing projects I've been thinking about for years. Scott is looking forward to re-focusing in his job and career, to playing more guitar and golf, and hopefully doing some rock climbing again.

I'm also asking God what He has in store! My prayer is that I would open to His leading and to the possibilities and opportunities that He puts before me.

I have decided that in honor of turning 40, that I am committing to writing 40 blog posts this year-- on life, on re-discovering who I am and how God wired me, on anything that feels relevant to this season of transition, to this season of growth!

I'm not sure what my posting schedule will be...I had considered once a week, on Sunday nights-- but 40 weeks sounds like a l-o-n-g time! I will commit to always posting on Sunday nights, but, when I have more time, I'll  post a couple times during the week as well. If you're a planner, just check in once a week (on Sunday evenings) and you can catch up on my posts that way.

Here's to being 40! To growing up. To raising a family. To embracing the chaos and passing of time, and the memories being made. Here's to looking forward, with great hope, to what the next decade will hold.