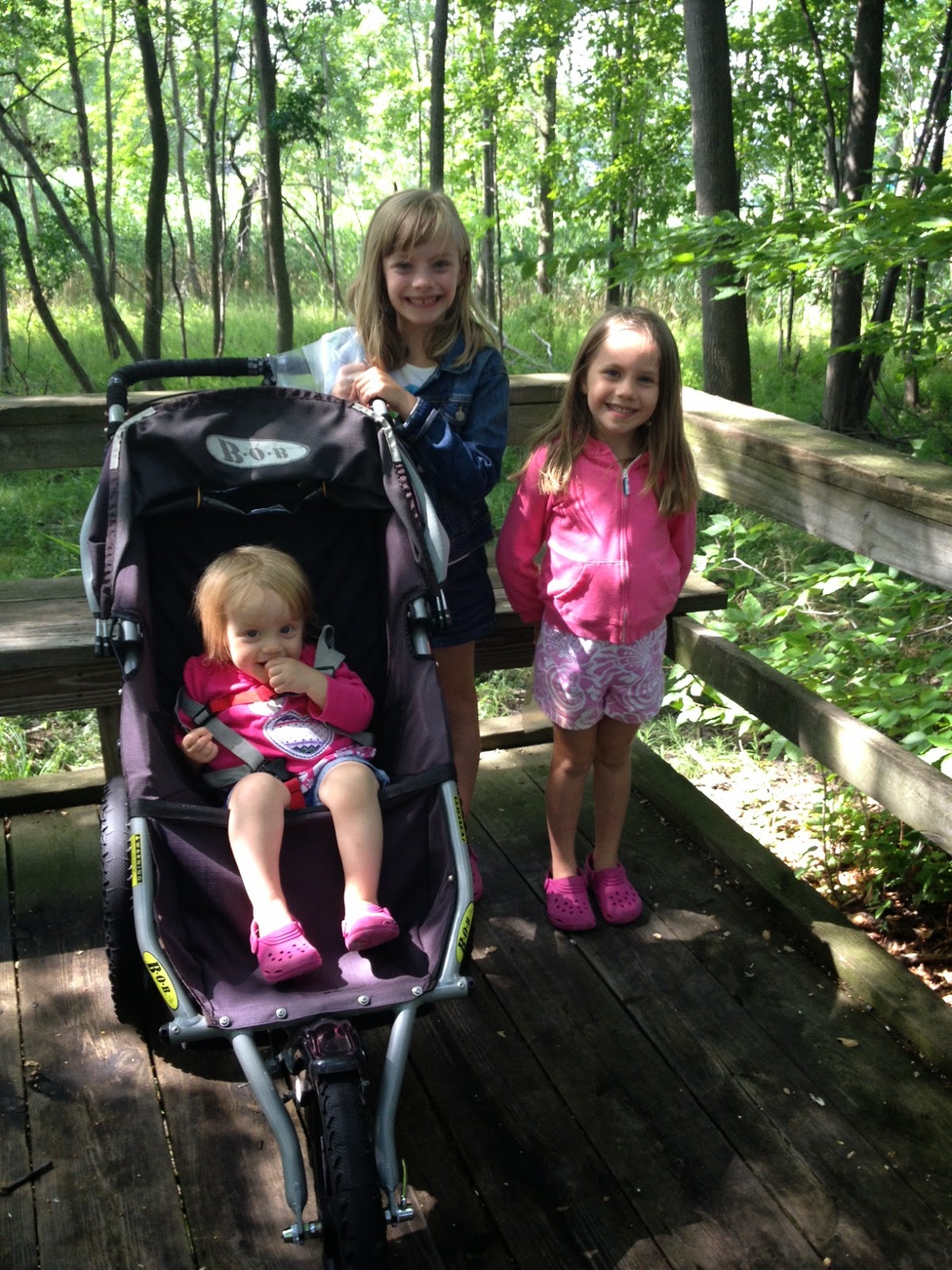 We have three of them.

We love them to pieces. To the moon and back...a bazillion times we tell them at bedtime.

They love to recount that they love us to the moon and back a bazillion and one times. We go back and forth about who loves who more until one of us recedes from the "I love you more" game and we all smile and bask in the hugeness of all of the blessed love in our house.

Girls are fun, and colorful. Sweet and creative. Sensitive and silly. Full of life and spunk and beauty.

Girls are squirmy, squeal-y and easily grossed out...mine are anyways (they've probably taken notes from me!).

As a matter of fact, right after this picture was taken, we were walking along a very groomed, very short, hiking path in a local park. You would have thought I had taken the girls into the Amazon for a week.

"Momma, are there wolves in here?"

"No girls, there are no wolves."

"Momma, do you know where you're going? Are we going to be able to get out of here?"

"Yes girls. Yes, momma does sometimes know where she is going. Just sometimes though."

We see a snake on the ground...way off the side of the path.

They screech and jump behind me again, afraid to move further. We now look like a scene from the Wizard of Oz where the lion, the tin man and the scarecrow are all cowering behind Dorothy!

Ava laughs with me. "We are a bunch of girls, aren't we mom?"

There is no denying that we are a house full of girls. We have pink and purple bedrooms. Lots of pink shoes, princess crowns and tutus scatter themselves amongst our decor with fierce regularity.

My sister and I each have three children-- she has three boys, I have three girls-- we love to talk, laugh (and, yes, sometimes whine and cry together) about the craziness of having three children. We chatter about the blessed mess, about the whining and the fighting, the laughing and the adventure. We compare notes, ask for advice and offer each other suggestions.

While there is a great deal of shared experience in parenting for the two of us, there are also vast differences that are easily noted when comparing the parenting of a set of three boys to a set of three girls.

I like to chide her that in my very naive opinion, I think boys, on some level,  MUST be easier! They are less emotional, less dramatic and require WAY less personal upkeep.

I still remember the day, last summer, when Ava and Ella both ran out to get the mail. Ava came back in the house with a triumphant grin.  Ella remained out near the mail box pouting and despondent.

Any momma knows that that means.

Big sister outran her littler sister to the mailbox, boldly grabbed ALL of the mail, leaving none behind and before the littler sister even had a chance to reach the mailbox came bounding back into the house to deliver the handful to me.

"Where is your sister?" I ask, eyes wide and cynical, already knowing the answer.

"She's still outside," big sister responds smartly, as if its no big deal, even though we all know that it is.

"Ava Katherine!" (the middle name always comes out in these conversations!), "Do you think that was very nice?"

"Are you serious right now?"

She gives me eyes that say "Are you serious mom?" though she knows better than to say such words.

"You go out and get your sister. Give her some of this mail and walk with her back into the house. Now!"

I spend the next 15 minutes channeling my inner spiritual compass and a little bit of Judge Judy and try to figure out how to best navigate the emotions of the situation.

When I finally share the story with my sister later she laughs and tells me that if that had happened to her two oldest boys, the middle one would have just knocked the older one to the ground- they would have duked it out for a minute and then all moved on their merry way.

What I wouldn't give for a one minute resolution at this point. Even if it did involve fists. Seriously.

And my poor husband is VERY outnumbered. Even the girls have picked up on this.

Just yesterday, while we were at a local playground an older couple nearby commented on how cute Aubrey was.

They nodded knowingly. "Yes, we can see that."

"And I'm the biggest sister. And the middle sister is over there."

They nodded some more and smiled, "Wow, three girls, huh?"

It took Ava the briefest second to report what I've reported dozens of times in similar settings, "Yes," she told them, "My dad is VERY outnumbered at home."

The poor guy. He is very outnumbered.

When things aren't so emotional we are in the thick of things that can tend to make girls complicated on a more superficial, but just as complex level.

Let us begin with the hair. Lots and lots of hair!

"Katherine!" I like to exclaim to my sister at the end of a long day, " The boys just get out of the tub and poof, they're ready for bed! or church! or wherever you're off too! I have hair to dry and comb and detangle. Lots of it!"

She doesn't argue. I actually think I can hear a smirk in her voice when she says, "Ah, yes, you are right about that."

There is the washing of hair, and the snarls in hair, and the drying and brushing of hair after every bath time. I figure if the girls take baths 4 times a week and you multiply the time spent combing conditioner through the hair and then drying it all...you're looking at a good 30 minutes extra of bathroom hair care per bath session. That's two hours a week!

After the hair care there is the whole topic of clothing with girls...an issue that we realize will become more complex with age.

Oh my heavens, we are still in elementary school, but it doesn't take a momma of girls a ton of time to realize that there are a LOT more details in this area of parenting. The skirts, and dresses, tights and shoes...the shoes, the shoes, the shoes! There are headbands, bows, barrettes, and clips. The are belts and scarves and necklaces and bracelets. Even for a mom who tries to be frugal and simplify where possible,  there is a lot of extra stuff!

Boys, all they need are some sweatpants, shorts and t-shirts, a pair of sneakers, a pair of dress shoes, a couple of church outfits and they're all set.

I suppose the boys make a bigger dent in the grocery budget, but I'm still convinced girls are more expensive in the long run.

So, I'm just saying, because I'm a momma to three girls, that I think they require an extra measure of time, money and personal care that can be avoided with boys.

Sometimes, as female as I am, I feel like I have no gosh darned idea how to navigate the estrogenic terrain of our household. I just look at Scott and throw up my hands. "Yup. No idea," I say.

And so I just laugh.

Or, if its around that time of month, I might cry.

But then I usually laugh again, because, as they say, laughter is the best medicine...or antidote, I say, to a house full of girls who will all be teenagers at some point...all at the same time for one  year.

Heaven help me...and my husband. At that point he may really need that "man cave" we like to joke about, and I may just go move in with my sister for a few weeks, where milk and bread may be in short supply, but saltines sans hormonal upheaval sounds like a real deal if you ask me.

At least the girls will be able to wash, dry and brush their own hair at that point.

And hope that my pre-menopause doesn't collide with three new bouts of PMS.

That might just send poor Scott, the mountain man without a rock in sight, running to the hills after all.