Confessions of a Carseat Sleeper


Hi. My name is Lisa and my 3 1/2 month old daughter sleeps in her carseat. Every night. And for every nap. Every day.

There, I said it.

Perhaps you are a recovering encourager of car seat or swing sleeping too?

I know! My doctor would probably yell at me if I told them...

But guess what? Those said professionals are not the ones trying to get sleep at night...sleep that comes in at least one 8 hour increment when she IS in the car seat and is much more broken up when she is not.

Sleep that comes in the form of VERY good naps every day (like 2 hours at a time!) when she is in the car seat and for only 30-45 minutes when she is on her back in the bed or bassinet.

I first told myself that I would transition her out of there at 3 months...it didn't pan out so well. Now I'm on the "we'll see how she's doing at 4 months" track.

I also googled "car seat sleeping".  I mean google has an answer for everything after all and I figured I'd see what the non-professionals had to say.

Guess what I found?! Forum upon forum of parents who...lo and behold...let their own babies sleep in either swings or car seats until they were...you might want to sit down for this...SIX MONTHS OLD!

It's crazy...I know. I'm hoping we're not on the trajectory to go on with this silly sleeping method for that long, but if we are, hey, at least we're not alone.

All that to say, sometimes a mommas gotta do what a mommas gotta do. I would venture to guess every parent on the planet has a story of some quirky thing they did to either calm their child when they were fussy, or a way to get them to sleep, or methods for getting them to eat...methods that don't seem super...textbook.

The car seat happens to be our little secret (or not so secret anymore!) method to our madness over here.

I fall into the trap of believing it is perfectly normal until something happens like the babysitter comes over (like last week!) and I have to take her upstairs and show her where to put the baby to sleep...

"It's a bit unconventional," I mutter...

She just smiles and says, "That's ok! At least she sleeps."

Or like when the neighbor kids were over the other day and Ava hollered loudly, "Hey! Want to see where my baby sister sleeps?!"

Oh gosh, don't show them that! I think as she drags them into our bedroom.

Ava doesn't realize that's not where most babies sleep...in a car seat that is sitting sideways in a bassinet in her parents room.

"Oh sure!" they respond enthusiastically, as I cringe inwardly.

Apparently they either don't know that that is not where babies are supposed to sleep or they are being very, VERY polite.

Either way, it's working for us and I think the whole thing is kind of funny. So much so that I figured I'd even post pictures here so if you are one of the hundreds of parents on that forum I discovered in google wondering if you're totally crazy, you can rest assured (as you are getting your rest at night!) that you are not alone! 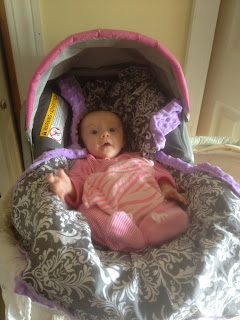 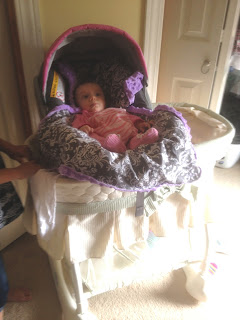