Stopping to Catch My Breath 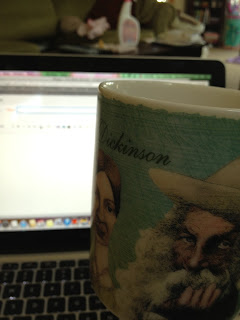 I'm sitting in the old corduroy chair, coffee cup next to me, computer on my lap, clicking away at this blog post while the littlest babe sleeps in our bedroom above me.

It's like old times...the days when Ava was first born and I would find a bit of respite during nap time throughout the day. The funny thing was, because she was my first, life felt crazy even with those bits of down time. Little did I know how much crazier it could get (:

The older girls are with Nanner (their grandmother) in Ohio for a few days this week. We drove out to Sandusky, OH on Friday, car top carrier packed on top, wiggly girls in the far back seat and me next to the baby in the middle while dad drove most of the way. In theory it should be about a four hour drive. With kids it is five. A looonnnggg  and noisy five.

Scott's aunt and uncle graciously welcomed our brood of 5, plus Nanner into their house for the weekend. I can't tell you how much I appreciate that they were so gracious and hospitable. We are a LOT of energy to host for three nights and we come with a LOT of stuff: Barbies, crayons, coloring books, breast milk in bags and bottles in the fridge, suitcases, pillows and lots and lots of extra pairs of shoes. Oh, the fun.

We attempted to take the older girls to Cedar Point on Saturday...boy was that a trip! Because I am nursing the baby and because Scott's aunt and uncle only live 10 minutes from the park we thought we'd do it in two shifts...a morning shift, come back to nap, eat some dinner and nurse the baby and then a later shift.

Only one shift was to be had that day...

The park was packed, apparently one of the busiest days all year. It was also very, very hot. In six hours Ava rode two big roller coasters (go Ava!), one with me and one with Scott and Ella rode a handful of little kid rides.  We experienced only a tiny fraction of what the park had to offer before heading back for our "intermission", with full intentions of riding more rides after dinner.

Unfortunately, by the time Ava fell asleep (Ella never did) and then woke up in a funk (she cried for half and hour about how she really wanted to go back but she was SOOO tired) we realized that heading back to Cedar Point for the evening was not in the cards. I was also out of pumped breastmilk and ideally needed to feed the baby again, and Ella was more interested in watching cartoons in an air conditioned house than trekking around a park with 40,000 other people.

And so we spent big bucks on four tickets to Cedar Point to ride two roller coasters and a handful of kiddie rides that looked like this... 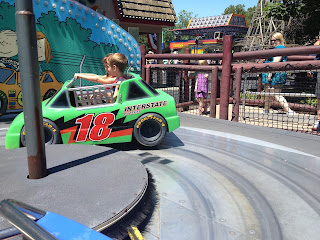 I sent a text to Scott, along with the above picture while he and Ava were waiting in line for an hour and fifteen minutes to ride one of the tallest roller coasters in the Northeast (it's shocking that my little kindergartener is big enough to ride such a roller coaster, but alas, she did not get my genes and is a whopping 48 1/2 inches this year!), the text said...

"This is about my speed today."

"Haha," he replied. There was so much truth in that picture and statement.

Ella and I were in a similar car, right behind this one, my legs crunched up and Ella giggling besides me.

While the day didn't turn out quite the way we expected it to, we did cross another parenting milestone off of our list...The one that says:

"Said parents will take small children to a large theme park and realize it's a tad more complicated than expected. Said parents and children will pay big bucks to ride small rides, but memories will be created nonetheless."

And memories were certainly created.

Ava is quite proud of her roller coaster riding prowess and Ella had fun in the small stock cars with mom by her side. We had bright red Icees and salty french fries.

It wasn't what we had planned, but it was good nonetheless.

Instead of returning to the park that night Scott and Nanner took the girls out for ice cream at Tofts (apparently Ohio's oldest dairy producer). I must say besides being Nanner's favorite ice cream joint the place that makes the biggest ice cream cone a girl has ever seen, which makes for very happy children on a hot summer night.

While they were out for ice cream the baby went to sleep for the night and I sat on a quiet deck reading a magazine until Aunt Gloria came back and offered me a nice chilled glass of wine...I got to read a magazine, have some girl talk and sip some summer blush wine while the ice cream lovers got their cold treat as well.  Now that I think about it it was a little bit of paradise for all.

So here I sit, baby just waking up, finding irony in the fact that one baby felt like a big handful when I only had one, but now feels like a break because we have three. I am trying to not have too many expectations for these few days while the girls are gone except to give Aubrey some undivided attention and catch my breath while she naps (which, fortunately for me, is still quite a bit!).

Here are a few more photos from the weekend....