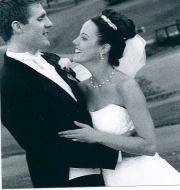 See that photo? That would be 9 years ago today!

It's hard to believe we have been married for 9 years and dated for 3 years prior to that adding up to a grand total 12  years together! I'm 34 this year...that's more than 1/3 of my life!

It's hard to believe that 9 years has passed...a SIGNIFICANT 9 years! We've changed jobs, purchased houses, become parents, moved from one state back to another and all of the crazy and fun life details that happen on the day to day in between. Wow.

And now we find ourselves in a new season of life...a season that is more about maintaining the house than making it pretty (you know, like you try to do when you're young, newly married and without children!) and meeting the needs of others much more often than our own. It's a beautiful season. A crazy season. A wonderful season, but I would have to say at times the most challenging season for our marriage so far.

Don't get me wrong, we have a WONDERFUL marriage. I hear stories of people I went to school with years and year ago and how badly their relationships have gone and I feel sad and grateful all at once. I feel sad for them and for our culture which feeds us all of the wrong information to actually have a healthy marriage...a culture that says focus on you, you, you...We are a selfish culture desperately in need of Jesus whose whole life was not about focusing on his needs, but laying it down for ours.

I digress...a bit...but I felt like I needed to say that!

This isn't a post about all that is wrong in our culture and our world, but about the little slice of life that is mine and Scotts. A slice of life that is good and founded on God. After 9 years of marriage I can honestly say we are so grateful for each other, but even more grateful for a relationship firmly and deeply rooted in our Christian faith. THAT makes all the difference.

I am proud of my husband. A man committed to his family and who loves his children. A man who tries to get up early to read his Bible before the craziness of the day begins. A man who loves to play guitar for our church because he loves being a small piece in helping others worship God and a man who feels the same way (even more strongly sometimes!) about movies and television and toys and all of the other crazy influences we find ourselves saying "no" to in our children's (and our own!) lives.

THAT, my friends, is romantic!

Want to hear another incredibly cute and romantic story?

We are in Grand Rapids, MI and I am heading off to a writing conference today and tomorrow...

I know what you're thinking. That is NOT very romantic Lisa.

I was on the fence about coming because life has been hectic and I've been in my first trimester and tired, tired, TIRED. Did I mention I've been tired!

I was also on the fence because I knew that this 2-day conference started on October 12th, which is our anniversary.

We had talked about celebrating another weekend, or going out to dinner next week or trying to figure something else out. I actually have a second conference I'm registered to attend at the end of the month (I don't typically take off this often, I swear! It just so happened that these ended up being offered in the same month) so I thought the one was more than enough and Scott and I would just do something else this weekend.

But Scott knows how big my heart is to find a meaningful direction and purpose for my writing and wanted me to go...awww...it melts my heart just talking about it.

At first I dismissed the idea because I knew it was not what he really wanted to do...but then I started to think about it...I LOVED the idea of 12+ hours in the car with JUST him. And staying in a hotel for 3 nights with JUST him!

I tried to curb my enthusiasm at first..."Well, babe...I mean...we can do something else. That's not very fun for you."

We looked into other options for a couple of days...nothing really came to fruition.

I know it's not because it's what he wanted to do for our 9 year anniversary, but because he knew it's what I was passionate about...

That might just be one of the sweetest and most romantic gifts he's given to me in a long while.))
So, we woke up this morning in a hotel overlooking the interstate...I know that doesn't sound very romantic either, but the sun is shining, the trees are red and yellow and their is a beautiful field on the other side of the interstate.

The housekeeping ladies just came in to make our bad (I would have done this all over again just to have my breakfast and my bed made by someone other than me!! WooHoo!) and said, "You two look all peaceful hanging out over there on your computers...

We smiled..."We are! The kids are at home, today is our anniversary...life is good!"

So yay for the real love that shows up after years of being married...a love that doesn't require roses and fancy dinners or places that fall into the stereotypical "romantic" category...it's really just about being together...even in Grand Rapids, MI.

Thanks babe! I love you lots! I'm so glad we get to do this thing called life together....


Here's a link to the conference I'm attending this weekend. It's still a smallish conference put on by a WONDERFUL group of women that I met earlier this year. I'm excited to see them and to garner wisdom and encouragement from them...

http://breatheconference.com/home/
Posted by Lisa at 9:51 AM