The Offering of Flowers

I picked flowers for Ava this week.

Why? Because I saw them and I thought about her. I thought about how she loves to pick flowers from the grass, from fields, on walks, anywhere we see them and no matter how much they are actually like weeds (like dandelions) or not (like daisies). 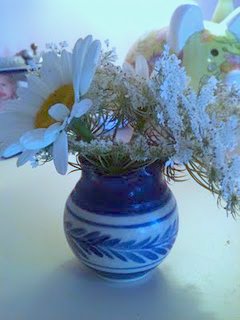 I thought about how she picks them because she thinks they are beautiful (even though our more mature adult minds eventually convince us to believe that there is not much beauty in weeds) and there is an impulse in her, an impulse that comes from her heart, the place that she loves that says, "I want to pick these for my mom because I love her and I think she will like them."

Maybe it is one of her love languages. Gifts. The giving of flowers. I wanted to love her back using her love language. So I picked these flowers while I was out on a walk with the intention of giving them to her when I got home.

I asked Scott if he wanted to go for a walk with me and we put the kids in the double stroller (even though Ava is almost too big for it) for a couple of blocks.

Unfortunately, the whining came along for the walk as well. I want to walk. I want to go home. I don't want to sit in this stroller anymore.

And so I went. And walked fast and hard. Away from it all.

And then I saw the flowers. The weeds. The beautiful, white, lacy weeds and I thought about Ava and how much I love her in the midst of it all. So I picked the flowers, a small bouquet to take home to her.

As a token of my love for her. Perhaps as a peace offering between us.

She was asleep by the time I got home, so I put them in this little vase, a vase that an art teacher I used to work with gave me as a gift once. I treasure it because I treasured her opinion about things. She once told me, when Ava was only a couple of months old, that even though she had to sacrifice many of her artistic desires and passions in raising her own children that come to find out they, her children, were her most beautiful works of art.

I placed them just so on Ava's dresser while she was sleeping so she'd see them in the morning.

When she woke up the next morning and came down to snuggle with me on the couch I said good morning and then, "I picked some flowers for you last night. I put them on your dresser."

Her face lit up. "I saw them," she said brightly.