Usually it is the man rescuing the woman...I know that is very cliched and anti-feminine of me, but hey, I'm just sayin...

I can't even begin to count the number of times my dear hubby has had to rescue me from any number of unexpected plights; because I had two flat tires in the middle of a grocery store parking lot after hitting a curb, because I was locked out of my car after an interview I had conducted for an article I was writing (I stood in the parking lot next to my car on a cold wintry day pretending to look at my cell phone and hoping no one I had just spoken to would see me), because I have been locked out of the house more times than I can count, because I have run out of gas (not in a long, LONG time, but I do remember at least one time in Cambridge, MA when this happened), and likely many other small occurrences that I'm conveniently forgetting about.

Well, well, well, the tables turned yesterday and me and the girls got to be the heroes...and they enjoyed every minute of it. It was really pretty cute.

Not completely sure what happened to our car, the mechanics are still trying to figure that out, but plain and simply it just died 30 minutes into an hour long drive South while Scott was on his way to a business appointment yesterday. Everything just shut off and Scott was forced to pull over on the side of the road...on a pretty major thruway (the 219 in Hamburg) with cars whizzing by and nowhere to go.

He called to tell me the car had died and I basically told him  to call AAA and then call me back because by the time I would have loaded the girls into the car and drove all the way out to where he was it would be 45 minutes and I had just gotten home with the girls.

Ava, who overheard the entire conversation evidently had more automatic compassion than her dear momma.

I looked at her and chuckled. Partially because of how emphatically she had said this to me and partially because I knew she was right and it wasn't very nice of me to just leave my husband on the side of the road 35 minutes away from home...I was going to come around to the same conclusion eventually....I swear! It just took me a few more minutes.

"You want to go rescue Daddy?" I asked.

Both girls started shrieking as they put their shoes on...evidently the thrill of the rescue was so exhilarating they could hardly contain themselves.

For the entirety of the ride out to pick Scott up from the side of the road in Hamburg, N.Y. the two of them alternated between asking questions about where Daddy was and how he got stuck and just shouting out "Yay! We're going to rescue Daddy!"

At one point Ava exclaimed, "Mommy, this is SUCH a fun day!!"

Who knew? After all the crazy craft ideas I try to come up with, and games we try to play, and plastic crap that adorns our house beckoning to be used, and the girls just want to go on a rescue mission...

...it's kind of funny actually.

We finally found our man on the side of the road. The girls screamed in delight and enjoyed every minute of our 20+ minutes sitting in the car waiting for the tow truck to show up. This was an adventure after all.

When the tow truck finally arrived Ava wanted to get out and watch as the driver put our car on the back of his tow bed. Ella was sitting on my lap in the driver's seat saying "Whoosh and WOW!"with wide eyes every time a car went by on the Thruway and shook our car. She was also trying to put my window down and stick her head out of it...I pulled her back in...several times...and finally locked the windows.

Here is Ava watching with awe and wonder as our car gets put on the tow bed. 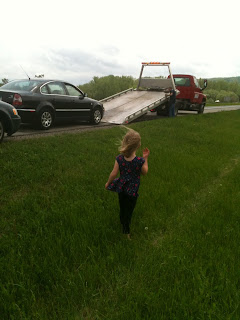 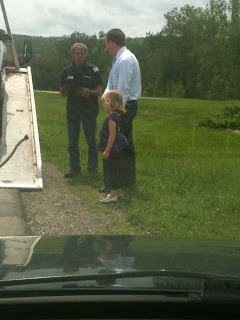 Here's to being thankful for little munchkins who turn something pretty inconvenient into an adventure!
Posted by Lisa at 4:30 PM