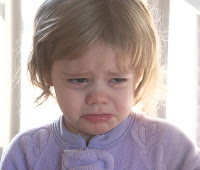 Oh my heavens...have we ever reentered back into the land of the 'terrible twos' over here! (That's not Ella, by the way, but she certainly looks like that on many an occasion these days).

I gotta tell you...I've always hated that label 'terrible twos', but truly, there is no other practical way to explain little Miss Ella's behavior lately.

I've actually stopped counting the number of tantrums she's had today...it's like one every 12 1/2 minutes she's awake...seriously.

Today, for example, she woke up and she was happy, but THEN...

...I wanted to change her diaper and she refused to lay down, and then she was upset that I grabbed her diaper because SHE wanted to do it...tantrum.

12 1/2 minutes later...I grabbed her clothes and started to get her dressed....she flips out because I tried to put her arms in the arm holes of her shirt...SHE wanted to do it.

12 1/2 minutes later...alright, maybe a few more...she was in the middle of eating her breakfast and there were egg yokes dripping down her chin, almost onto her shirt, and major snots dripping out of her nose...I grabbed a warm cloth to wipe her face....bad move...MAJOR TANTRUM...I mean crying like someone had just stomped on her foot, or stolen her favorite toy....for like 10 minutes!

I let Scott deal with that one...

I let Scott deal with that one too while I put Ava in the car.

12 1/2 minutes later...we arrive at church and are walking in and before I even know what is happening Ava runs up to the door and pushes the handicap access button to automatically open the door and Ella starts screaming and flings herself almost on the ground!!! Truly.

I have to pick her up and try to rationally  explain (for the record... there is no such thing as rational around here lately) that she can press the OTHER button on the inside of the door that opens the second set of doors!!!! I then have to forcefully command Ava, who is about to press the OTHER button, to stop all actions so that Ella can do it before I have a flailing two year old on a wet, snowy sidewalk outside of a church!

Well, I dropped them off for almost 3 hours and did some writing, a Zumba class and grabbed a few groceries...I picked them shortly after 12 noon....

12 1/2 minutes later...Ella is screaming AGAIN. I had let them run outside, each one got to press a handicap door button (though that was almost an issue again!) and put them in the car. Ella insisted on climbing in (instead of my putting her in) which I let her do...but then she just stood there...I tried to give her a choice (like I used to do with Ava and which USED to work well with Ava!)

"Ella, you have until I count to 3 to climb into your car seat or I will put you in."

She just stands there, in the car, and turns and stares at me. Not moving. Not one inch.

She stands and stares.

Turns away and does not even look at me anymore.

I grab her and put her, KICKING AND SCREAMING, into her car seat. I literally have to hold her down to buckle her in.

She flings her cup as hard as she can to the floor.

I'm telling you, this one is a STINKER. Ava was naughty, but usually eventually compliant. Ella has baby anger management issues. I'm sure of it.

I finally pull a technique my own mother used to pull. The "sit on the side of the road until everyone behaves" technique.

"Ella. I am stopping this car right now and we WILL sit here until you stop all of this nonsense!"

"Ella, you can tell me when you're ready."

"Are you ready now."

She whimpers a "yes" as she nods her head up and down...

We finally pull away.

I think that was it so far, but she's been sleeping for 2 hours...so I'm not sure that exactly counts....

Lord, bless me with patience and wisdom to handle a two year old! People say they're worse as teenagers, but I'm not sure....

I don't think Scott is winning the "whose job is harder" conversation today...

Oops. Did I say that out loud?

Love you honey. But you can take the two year old to Utica with you tomorrow.
Posted by Lisa at 3:58 PM