Ella will be 16 months old tomorrow, I just finished a half marathon and am down almost 2 pant sizes in the last couple of months and a very oblivious old man STILL asked me if I was pregnant at a wedding this past weekend!

"ARE YOU SERIOUS OLD MAN?" I wanted to ask. Followed by, "Is that your REAL hair and are those your REAL teeth?" (The only thing I could think of as ignorant as asking a woman who is 16 months post a second pregnancy if she is pregnant!).

I'm really usually quite nice to old men, but don't go THERE...


To my chagrin this is not the first time post baby #2 someone has asked me or implied that I was pregnant, but I thought those conversations had finally come to an end.

About six weeks after I had Ella I was in the grocery store and the well intentioned cashier asked me if I'd like help carrying out my groceries...

"You should be careful," she said patting her belly and smiling at me.

I just smiled back. "No thanks. I'm used to carrying around my toddler all day."

I left it at that.

The second time I was in a step aerobics class 8 weeks post-partum, wearing t-shirts that shouldn't have been snug around my belly but were and feeling that naive sense of slimness that follows post-partum when you're not really skinny, but you feel SO much skinnier than you were and so you start pulling out pre-pregnancy clothes and squeezing into them.

I stopped after class to ask the instructor a question.

"Oh! Me? Oh, I just had the baby...um...six weeks ago..." It was a slight lie to help appease embarrassment on both of our behalves.

There were one or two more occasions afterwards in which moments were slightly awkward and I could tell someone thought I might be pregnant, but in which we just breezed over the details to avoid further awkwardness.

And then those awkward moments seemed to stop for moths. I laugh as I write that because I'm now realizing they stopped throughout the winter, when sweaters and coats and big t-shirts camouflaged my belly.

Now that we are returning to the days of skirts and shorts, dresses and t-shirts and have put away our jackets that were so nice to hide behind the reminder has evidently come plunging back to me that my tummy does not at ALL look like it used to. It has taken on a form as wild and chaotic as my children some days.

I remember, prior to having Ava, being at a baby shower and sitting with a group of women in their early 40's who were all recanting similar stories of woe in which strangers had mistaken their bulge for babies.

I remember thinking, "Oh man. That stinks. I hope that never happens to me."

I can now join that table.

Well, enough of the woe and onto my plan. 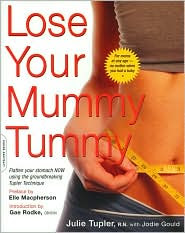 I've decided it's time to take action over my belly and see what I can do. I've heard good things about this book Mummy Tummy, and told Scott I would like it for my birthday later this month. Besides extra weight around my belly area my abs have officially split, a condition that is formally titled rectus diastasis and can sometimes happen after pregnancy (especially when you are 5'1 and appear to be carrying triplets during your pregnancies!) and apparently crunches actually make things worse-- so I need some more condition specific suggestions.

I'm also trying to be aware of my eating habits- likely  my biggest issue. Obviously if I was running 20+ miles a week while training for the 1/2 marathon and didn't drop a pound it is not the exercise but the eating that needs to be addressed!!

Everyone I know would tell you I'm a relatively healthy eater, which is true. I eat lots and LOTS of vegetables and grains and fruits-- I don't eat a ton of junk food etc. BUT I do have a portion problem, especially where things like cheese and carbohydrates are concerned...give me some carbs (a good potato or pasta) covered in cheese and we're in REALLY big trouble.

So, my plan is better portion control (i.e. deliberately planning healthy meals and snacks and not grazing in between), cutting back on evening calories-- like the snacks and glasses of wine I've been indulging in after 9 p.m., and cutting down on carbs (one piece of bread instead of two on a sandwich).

My goal is to lose 15 lbs. by the end of the summer...and to NOT look pregnant any  longer, even to silly old men!