If you ever had the pleasure of meeting little miss Ava at either nap or bedtime you would have discovered that A) she is often hilarious right around the times she is supposed to be going to sleep and B) she has been very, VERY addicted to her binky.

Despite warnings from well intentioned friends and other mothers to get rid of it sooner 3 was always the magic number in my head. If she didn't give it up by her third birthday serious action would have to be taken.

Despite discussions on our behalf about how mommy and daddy and autie Caitlyn don't sleep with binky's and even somewhat jokingly telling her her teeth would fall out or get VERY crooked if she kept using it, she was still hooked. She was going to hold onto that thing as long as she could.

We've actually been weaning her for quite some time now. Since well before her second birthday the binky became ONLY for bedtime and was to be kept under her pillow for safe keeping at all other times.

Then, a while back, I read an article about actually clipping the binky nub down so that the sucking sensation would not really work any longer. I thought that was a GREAT idea.

As a matter of fact months ago we first switched from letting her use her big binky's (see binky on left) to only allowing her to use the 0-6 month binky's that look like this (see binky on right): 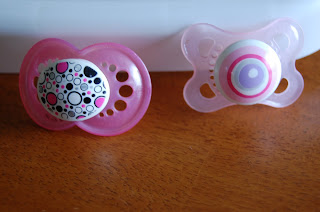 Then, I snipped the tops of the smaller binkies.


She had two of these that she was allowed to use.  At first she looked at me kind of funny but then there was this underlying sense of "I know I'm supposed to give this up so if mom is still going to let me have this silly cut binky then I'll take what I can get."

The good thing about this is that I think she was actually subconsciously learning to sleep without the binky, even though she was using it to initially fall asleep. Once she fell into a deep enough sleep these small snipped binky's fell right out of her mouth and she spent the majority of the night sleeping without one.

If you are wondering, yes, the binky fairy did visit. Three times.

The first time was about six months ago. She seemed to be having a fairly happy day and when nap time came I started talking up the binky fairy and how she would leave a present if we mailed her a binky. We put one in an envelope, put an address on it, wrote a note and stuck it in the mail box. Ava was all excited about a visit from the binky fairy until nap time arrived...then she freaked out.

I'll admit to being a softy. And also wanting a nap. She's not three yet anyway, I reassured myself. I have time.

I gave her another binky. (Now that I think about it, I think this is when we switched to the smaller ones).

I was trying to be encouraging so when she woke up I actually told her that the binky fairy had stopped by to take her big binky and left her a note and a present for being such a big girl to send her the binky. She was pretty excited about it all.

Not enough to get rid of her binky that night....back to the drawing board.

Fast forward five months to the middle of May (about three weeks ago). We really talked the whole big girl thing up, said the binky fairy would leave a present if she slept without her binky and she was excited. She actually did nap without her binky. The binky fairy left her the pretty yellow dress in the picture below.

...And we thought we were well on our way to success.

Then she got sick two nights later. She had a fever, she was miserable, she was inconsolable. There was no way she was sleeping without that thing and it seemed cruel to make her.

The binky was back.

We put the dress in the closet and said it was a present from the binky fairy for big girls who don't use binky's and that she could have it back when she stopped using hers.

Well, Ava officially turned 3 last Friday. We were in Massachusetts visiting friends at the time and decided to address the issue when we returned.

Monday night, the night we returned, I snipped the small tip of the binky down so far that it would not stay in her mouth unless she held it there. We first tried no binky cold turkey and she was miserable so I thought I'd offer this new alternative. 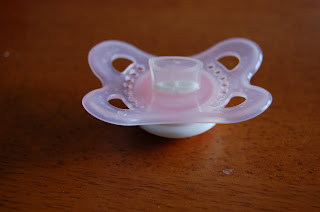 "This is the only binky you're allowed to have," I told her, offering her the very small, no nub binky.

She put it in her mouth. It fell out.

"It doesn't stay in my mouth mommy."

"I know honey. What did we talk about will happen if you keep using binky's?"

"My teeth will get crooked."

"That's right. So we can only use this one now."

I felt a little silly and a little sad for her, but knew this is what we needed to do. She took the peace offering of the snipped binky, held it in/near her mouth until she fell asleep (at which point it fell out), but then last night and this afternoon told me she didn't even want it.

"Do you want your binky?" I asked her last night.

I swear she almost laughed aloud at me.

So, we are officially binky free with Ava.

Sadly, a bad episode of teething has prompted Ella, who hasn't used one since 8 mo. old to take up the habit. She has been so miserable that I half jokingly tried it one day because I didn't know what else to do.

Oh well. Choose your battles, right? We'll address that one when the time is right! If I've learned one thing about being a parent it is that many things come and go in phases and some of them just are not worth fighting. We need to save our energy for the important things.

Besides, I reason, they're probably going to end up needing braces at some point anyway, why not buy myself some extra peace now. 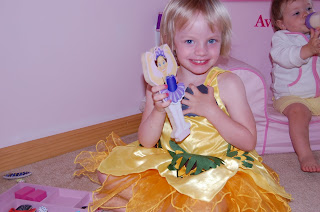 (This is Ava with her gifts from two binky fairy visits-- first, the yellow dress, second the magnetic ballerina!)
Posted by Lisa at 4:53 PM