Isn't this a cute shirt? 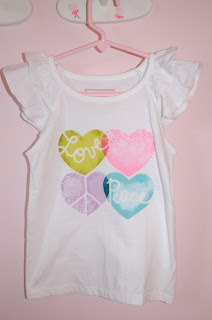 Ava WILL NOT wear it.

It's the funniest thing. I picked it up at Target a couple of weeks ago and decided to put it on her one sunny day about a week ago.

"Mom, are these ruffles?"

"No. I don't like the ruffles. People will look at me and say that girl has ruffles on her shirt."

Now, usually I can figure out from our shared experience where some of her quirky ideas come from. This one though...completely from LEFT FIELD.

Alright. She doesn't usually argue about the clothes I put on her, so I wasn't going to battle her on this. I took it off and we put something else on.

I queued Scott into what had happened and the other night while they were hanging some of the clothes in her bedroom on hangers he pulls it out of the closet.

"OOOOHHH Ava. I LOVE this shirt."

She looked at him with a defiant grin.

So anyway...nothing deep to the story here. It's just been a funny thing. My child, who will put a princess dress on any day of the week and dance around the living room, who has worn ruffled skirts and loves a pink tutu, refuses to wear this shirt with the ruffles for sleeves!

It is an ongoing inside joke in our house. Scott and I pull the shirt out when we think about it and taunt her a little bit.

"Oh Ava, this is the prettiest shirt I have ever seen!" We'll say.

It's the ONLY item in her closet that she says this about. I don't get it...except that I'm also female which means that on some level I DO get it, which is why I'm not fighting her on it.